There will be significant extra funding for improving ‘world-class’ institutions, under the proposals for Prime Minister Narendra Modi’s first budget in his second term in office.

Even before Modi’s victory, preparations were underway for a wide-reaching review of the country’s higher education sector.

With over 900 million eligible voters, the world is about witness the largest democratic exercise in history.

With the first phase of polling for general elections in the world’s largest democracy underway, India’s main political parties have released their manifestos promising much for higher education.

UGC comes up with a 5-point plan to help Modi get the jobs he is looking for.

Initiative set to target 20 countries for Indian institutes to collaborate with.

A recent clarion call to the Union Government aimed to increase funding for science and education in the upcoming budget.

Funding for education is only a small percentage of India’s GDP compared with nations.

PM Modi recently claimed measures like the granting of central status were “a thing of the past”.

The Modi government is set to replace the UGC and AICTE with a single higher education regulator.

New framework to catapult new Indian institutions to global recognition by freeing the best of them from UGC restrictions & ushering in greater autonomy.

The complete article is available to read via the Economic Times.

Degree-granting powers to 15 IIITs set up under public-private partnership mode.

For the full report, visit the Economic Times.

In November 2016, India’s government suddenly declared that all 500- and 1,000-rupee notes no longer held any value, sending citizens across the country scrambling to exchange their now-worthless bills. In the aftermath, university students are finding it difficult to get a hold of the cash they need for daily expenses, such as buying food, printing documents, and getting top-up for their mobile phones.

Jordan Reeves, Consul General of Canada in Mumbai says that he is upbeat about the rise of Canadian equity investment in India. He further says that Canadian investors are bullish on the Indian economy as is evident from the fact that they have made around $11 billion investment in India in the last year. Canada is also a major collaborator towards the realisation of the skill initiative. In April 2015, during PM Modi’s visit to Canada, education and skills development were identified as priorities. Thirteen MoUs were signed between India’s National Skill Development Council and Canadian colleges and institutes to formalise skills collaboration in various sectors. Modi also agreed to take concrete measures to expand bilateral cooperation in key areas including the economy, trade and investment, civil nuclear cooperation, energy, education and skills development, agriculture, defence and security, science, technology, innovation and space, culture, and people to people tie.

For the full article, visit the New Delhi Times.

Ten of India’s states have so far come out in favour of enabling foreign higher education institutions to operate in the country, but any new policy must ensure that foreign providers have something to offer domestic students, they have said.

There is currently no legislative framework in place to allow foreign universities to operate in India. The 2013 Foreign Education Providers Bill has been blocked from passing on several occasions, but last year Prime Minister Narendra Modi said that the government intends to let foreign providers operate campuses in the country.

For the full article, please visit The PIE News.

Representatives from five Canadian colleges and nine universities have travelled with Ontario Premier Kathleen Wynne on a trade mission to India. An ON release states that the purpose of the mission is to “strengthen economic, political and cultural ties with the world’s third-largest economy.” The creation of new institutional partnerships between the two countries features as one of the highest priorities for the participating Canadian PSE institutions. Prince Edward Island Premier Wade MacLauchlan has also joined the mission, along with 12 delegates from that province.

Prime Minister Narendra Modi is ramping up efforts to promote India as a global study destination, planning a Study in India campaign and revisiting legislation to make it easier for foreign higher education providers to set up branch campuses in the country.

The Ministry of Human Resource Development has been in consultation with higher education institutions about how to increase the number of overseas students at Indian institutions, including through a Study in India campaign.

The plan is set to be included into the New Education Policy currently being drafted by Modi’s Bharatiya Janata Party, and could include funding for selected institutions to develop the infrastructure to accommodate more international students.

For the full article, please visit The PIE News.

A group of researchers say that Indian Prime Minister Narendra Modi’s visit to Canada last month may have been a missed opportunity. The researchers have published an article reflecting on the importance of international higher education as a strategic priority for building the relationship between the two countries. The article notes that in contrast to Modi’s recent trips to France, Germany, and the United States, his visit to Canada did not generate a discussion of international academic relations. Such relations, the authors say, are “crucial.” They note that India is the world’s second-largest “sender country,” and emphasize the importance of the Indian diaspora in Canada. The essay encourages Canada to promote “inter-civilizational dialogue” to help develop stronger ties with India.

A group of Canadian PSE institutions is planning to sign MOUs this week with India’s National Skill Development Corporation (NSDC) during a visit by Indian Prime Minister Narendra Modi. 12 institutions, including 9 colleges, will work with Indian partners in specific sectors to create and improve training opportunities for Indian youth. The Indian partners will pay the colleges for services including curriculum development, training for Indian educators, and help with accreditation systems. NSDC, a large public-private partnership that aims to develop for-profit vocational institutions, has established centres of excellence across India that will house the partnerships. 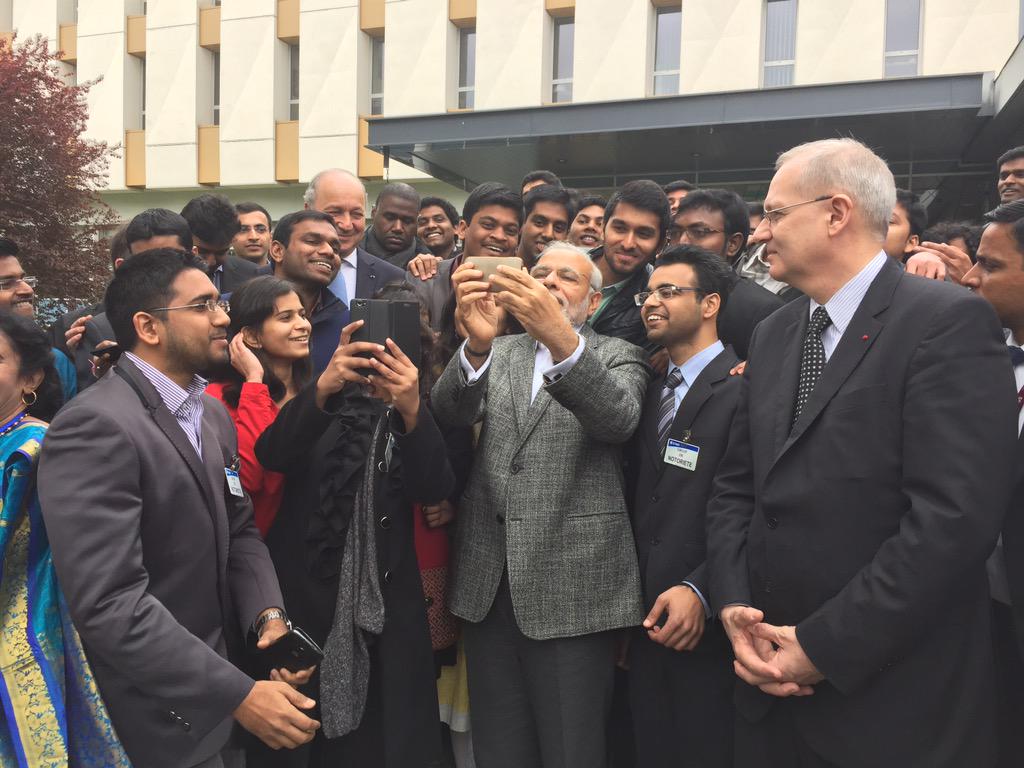 With a new government in place in India, Hindi seems to be bouncing back with a bang. Not only in India but in the world at large. The international business community has read the writing on the wall. If the world wants to do business with India, business community need to communicate with the new prime minister Mr. Narendra Modi in Hindi. Modi is market friendly and has acquired a solid reputation as a tough man and a quick decision maker. It is not surprising that 19th June newspapers have carried a news that the Indian Home ministry has asked government offices to give preference to Hindi. These are the signs of changing times. More is likely to come soon.

For the complete article, visit HindiCenter.com

India’s Prime Minister, Narendra Modi made a much anticipated stop in Toronto, Canada for a Community Reception during his three-nation tour. This marked the first time an Indian PM visited Canada in 42 years. The PM was eager to meet his Canadian counterpart Stephen Harper as well as address the Indo-Canadian community during his visit to Canada.

Canada India Education Council has joined the National Alliance of Indo-Canadians (NAIC) as a Welcoming Partner for this historic event which will be attended by several CIEC members and guests.

PM @narendramodi and @pmharper arrive at the venue. Tremendous enthusiasm all around. pic.twitter.com/CyZVBAkkJx

The thousands in attendance were full of excitement as they chanted “Modi! Modi!” However in the midst of the celebrations business was still attended to. Various agreements were signed and ties between the nations were further strengthened.

Modi was quoted as saying “Canada is a major Asia-Pacific power and should play a more active role, including in regional institutions.” Harper said about the relationship between Canada and India, “It’s not where we want it to be, but it’s growing.”

At the event, Harper welcomed Modi as an individual “with humble roots and a devout spirit”. Modi then came to the stage, thanking the Indo-Canadian community for all they have done in terms of “enhancing the glory of India” abroad.

As part of his visit to India, from October 12 to 18, Minister Fast, joined by Minister Findlay, led a trade mission to Mumbai, New Delhi and Chandigarh, accompanied by representatives from 14 Canadian companies. In addition to bilateral meetings with senior leaders and ministers, Minister Fast and Minister Findlay also witnessed the signing of several Memoranda of Understanding aimed at bolstering Canada-India trade and investment partnerships.

In the lead-up to their visit, Minister Baird and Minister Fast announced the appointment of Nadir Patel as the High Commissioner-designate for Canada to India.

Prime Minister of Canada, Stephen Harper, has lauded the entrepreneurial spirit of Gujarat and said that the state is playing an important role in strengthening Canada-India relations. In a letter to Chief Minister Narendra Modi, the Canadian PM said that Gujarat, one of India’s most dynamic and industrious states, is world-renowned for its entrepreneurial spirit. “The state is an important partner for Canada thanks to its strategic location, strong economic credentials, and multilingual skilled workforce,” Harper said in the letter. Canada is one of the partners of Vibrant Gujarat Summit 2013,. Describing Vibrant Gujarat Summit as an international platform which provides a wonderful opportunity to foster new commercial relationships and enhance people-to-people ties, Harper said that Canada recently opened a trade office in Ahmedabad to facilitate new business and trade opportunities for Canada and the Gujarati community.“I would like to thank the Chief Minister Narendra Modi and Gujarat government for their contributions to strengthening Canada-India relations,” the Canadian Prime Minister added.