The shorter exam will be available for test-takers worldwide beginning April 16. 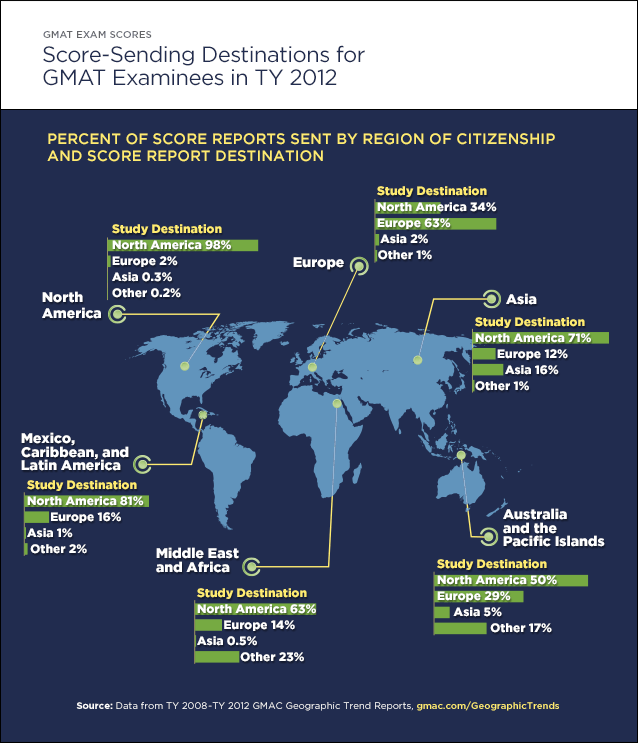 RESTON, Virginia (February 27, 2013)—Graduate management education is becoming more global and more diverse, as a broader range of global applicants are sending their GMAT scores to different types of programs in different parts of the world, according to a trio of student mobility trend reports out today from the Graduate Management Admission Council.

“Test takers today have an increasing number of study opportunities with quality schools emerging all across the world, and more types of graduate level programs to consider,” said Alex Chisholm, GMAC director of statistical analysis. “Test takers sent scores to a record 5,281 programs in 2012, up 21 percent from 2008, reflecting growing interest in a variety of programs and study destinations.”

The record volume partially reflects increased interest in the GMAT exam with the addition of the Integrated Reasoning section on June 5, 2012. Historically, test volume rises just before changes are made to a standardized exam as test takers opt for a familiar format at the transition. GMAC administers the Graduate Management Admission Test, used in graduate business and management programs worldwide.

Within the latest numbers are signs of increasing diversity. Key trends:

With 58,196 exams taken in 2012, Chinese test takers are the second-largest citizenship group after the US and represent 20 percent of global testing.  The proportion of scores Chinese citizens sent to the US was up slightly (78 percent in 2012, compared with 77 percent in 2008) as their interest in specialized master’s programs has increased — from 43 percent of scores sent in 2008 to 64 percent in 2012.

Indian citizens, the third-largest citizenship group, took 30,213 GMAT exams in 2012, and test takers are sending a higher percentage of scores to programs in India, the United Kingdom, Singapore, France and Canada.

European citizens sat for 24,847 GMAT exams in 2012, up 26 percent from 2008, and they sent more than 60 percent of their scores to programs in Europe, the highest level ever. Citizens of Germany, France, Russia, Italy and the UK together sat for more than half the region’s exams in 2012.

The World, Asian, and European Geographic Trend Reports are available at gmac.com/geographictrends.