Women in India take a back seat in science and technology research, but they are at the forefront of the country’s world-class space agency.

Heatwaves have caused thousands of deaths in India. A look into environmental science, the university major, that could make all the difference in the world’s “front-line state.”

IITD is set to extend its reputation beyond engineering.

Though science should be taught through observations and demonstrations, it has been limited to lectures.

Aadhaar-linked direct benefit transfer of scholarships to CSIR and UGC fellows was meant to eliminate delays in funds disbursal.

The research park at IIT-Madras has grown from a sparsely occupied shell to a huge venture.

Indian govt investments in R&D are not small as a percentage of R&D, but the numbers do not tell the real story.

The journal impact factor has numerous flaws, making it irresponsible for the UGC to rely on it.

This opened the doors to candidates with just 18-20% marks in the NEET aggregate.

With engineering losing its sheen, science courses have re-emerged as India’s second most popular undergraduate stream.

India accounts for one-fourth of the bachelor in science and engineering degrees awarded across the world.

A recent clarion call to the Union Government aimed to increase funding for science and education in the upcoming budget.

About 35% of the initial batches of INSPIRE faculty fellows now find themselves at the end of the road, with neither a job in hand nor any encouraging prospects.

In a free society, scientists funded by tax-based sources should obligate themselves to celebrate their discoveries with the public.

A 21-year-old student from Lucknow, Aadarsh Mishra, currently working on a project for DRDO with experts from IITDelhi, has achieved a rare feat.

The Islamic seminary is aiming to reclaim women’s place within the enterprise of Islamic scholarship.

Thousands of students, scientists and supporters gathered in 30 Indian cities to support the country’s ‘March for Science’ earlier this month.

For India to be on par with the scientific enterprise in developed nations, we have to have consistent funding for science.

Universities in India should introduce a charter mark for gender equality that originated in the UK to help boost the number of women working in science, technology, engineering, mathematics and medicine.

IIT-Kanpur is first among the IITs to start an Economic Sciences department. The new department came into operation from Saturday and students clearing JEE Advanced 2017 and also willing to pursue Bachelor of Science (BS – Economic Sciences) program would get admission in it.

For more, view the Times of India online.

Students who take Science, Technology, Engineering and Maths (STEM) courses look set to rake in the money once they enter the job market. And it seems to be a choice that will ultimately pay off, given the lucrative remuneration packages companies are giving to graduates from these fields. “Generally, STEM courses stand as one of the highest-paying jobs worldwide,” international education consultancy The Chopras managing director Natasha Chopra said.

Initiatives like the IISc Open Day strive to make science for accessible, but the debate on the public dissemination of science rages on.

Canada is happy to bring in more talent from India. 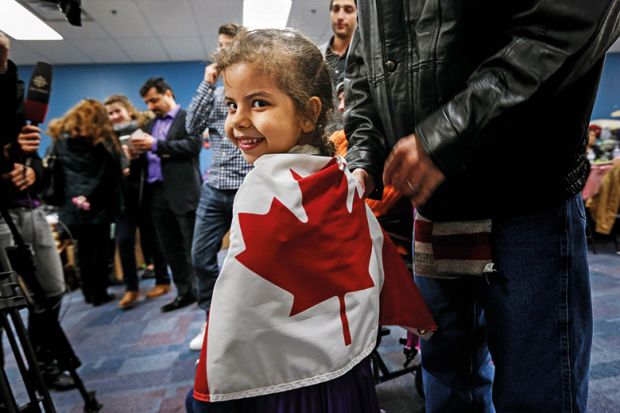 Canada’s decision to welcome thousands of Syrian refugees “stands out as an important symbol” of the country’s “openness and eagerness to attract newcomers,” says University of Toronto President Meric Gertler in an interview with Times Higher Education. Gertler highlights a number of significant steps Canada has taken to be open compared to the isolationist tendencies of Brexit and the Donald Trump presidential campaign. These include Canada’s efforts to attract 450,000 international students by 2022, its amendments to its citizenship process for international students, and its increased investment in research and scientific infrastructure. “Canada has certainly emerged as a place of stability, of openness, of inclusiveness,” says Gertler. “I think we’re doing many things right now that will position us as a stark alternative to things that are happening in other countries, including the UK and the US.”

IC-IMPACTS, headed by UBC professor Nemy Banthia, is teaming up with India’s Department of Science and Technology, as well as the country’s Biotechnology Department, to provide $4 million for the research projects. Each project, said IC-IMPACTS communications manager Ashish Mohan, features Canadian and Indian researchers and are in later stages of development, ensuring the resulting technology can be brought to market.

For the complete article, visit The Vancouver Sun.

Source: The Globe & Mail via Academica

British Columbia Premier Christy Clark has announced that her government will soon make “big investments” in the province’s postsecondary system to address a talent shortage in the tech sector. “There will be some announcements coming in the next little while with respect to investing in computer science in particular in universities … it will be a significant amount,” Clark added in an interview with the Globe and Mail. In July 2016, 18 BC tech executives sent a letter to Clark asking for the province to address the talent shortage. Clark did not specify, however, whether the final amount invested in PSE tech training would match the $100M requested by the executives.

The federal government has announced that Canada will invest nearly $8.4 M to support initiatives that bring internationally educated health professionals (IEHPs) into the workforce. Approximately 4.6 M Canadians do not have a regular family doctor, while there are 10,000 newcomers to Canada who are health-related professionals. The funding will support 3 initiatives that will be implemented through a collaboration between HealthForceOntario and the University of Toronto. Canada has also provided $150,000 to the Medical Council of Canada for a project intended to help international medical graduates prepare to enter the workforce. In a statement, Canadian Medical Association (CMA) President Chris Simpson welcomed the announcement, but warned that “actively recruiting from developing countries is not an acceptable solution to our physician shortage.” Simpson noted that “it has been almost 4 decades since the completion of a national study of physician requirements,” and said that Canada must become more self-sufficient in its efforts to educate and train physicians. Academica Group recently worked with multiple collaborators on a report that evaluated bridging programs for IEHPs.

An article published by the Canadian Press highlights efforts being made by Canadian universities to attract girls to the sciences and engineering. uToronto and UBC have recently reported increases in the number of women entering their engineering programs, but there is still a significant gender gap in many STEM-related professions. According to Engineers Canada, just 18.3% of undergraduate engineering degrees awarded in 2013 went to women. PSE institutions are working with other organizations to fix that by engaging girls before they reach high school. Research has shown that many girls lose their interest in the sciences by  the time they enter ninth grade, meaning that many don’t take the advanced courses they need to enter STEM programs at university. Ottawa-based charity Actua works with 33 Canadian institutions to offer girls-only science classes in the hopes of encouraging interest and inspiring confidence in participants, as well as getting parents to encourage young girls’ aspirations for STEM-related careers.

The Canadian government is seeking public input on a new federal Science, Technology and Innovation Strategy, with the launch of a discussion paper to guide the dialogue. The paper asks how Canada can “continue to develop, attract and retain the world’s top research talent at our businesses, research institutions, colleges and polytechnics, and universities” as well as “Is the Government of Canada’s suite of programs appropriately designed to best support research excellence?” Submissions will be accepted until February 7, and then the government will release an updated strategy “in the months following the consultation phase.”

TCS Insights: The Government of Canada indicated in 2013 that it would update their Science, Technology and Innovation Strategy while continuing to invest in research. This revision will be finalized after reviewing public input and is expected to continue the trend of recent achievements that have lead to greater funding of research.

Indian coaching services provider MT Educare has agreed to acquire a 51% stake in its local peer Lakshya Forum for Competitions, the buyer reported. Financial terms of the deal were not disclosed. According to the source, the total deal amount would be paid by MT Educare over three years and is dependent on certain milestones to be achieved by Lakshya. The deal agreement also provides an opportunity to MTEL to acquire complete 100% stake in Lakshya up to 30th November 2018. The acquisition is in-line with MT Educare’s offerings in the science section. It will now offer the entire end to end training to all its students aspiring for boards, JEE mains & JEE Advanced and NEET examinations for a successful career in the engineering and medical stream. Lakshya is a test preparation institute founded in 2006. It currently serves to more than 2500 students with faculty strength of 40 teachers of which 20 are IITians and doctors. MT Educare is the holding company of Mumbai-based Mahesh Tutorials, which runs the country’s largest school and college tutorial chain and is gaining ground in multiple new training segments. The institution has more than 188 centres in 110 locations across India.

By 2013, possibility of having the same curriculum for Mathematics, Science, and Commerce in schools across the country is fairly high. According to Dr. D. Purandeswari, Union Minister of State for Human Resources Development, such an idea has been agreed upon by the council of all the State educational departments. The success solely depends on the support from state governments who control over a million schools, in comparison with 11,000 schools under Central Board of Secondary Education. To make the quality of education both affordable and accessible, the government is going to enforce a number of regulatory bills including the Prohibition of Unfair Practices in Technical; Medical Educational Institutions and Universities Bill; and Foreign Universities Bill. As of 2011, the government has allocated 3.8% of the annual public expenditure on education.